(News from “The Times of India:)INDORE: “Blessed Rani Maria, pray for us,” proclaimed Vatican ambassador Cardinal Angelo Amato on Saturday. And 15,000 Christians repeated the words after him at a local school in Indore, marking the beatification of Sister Rani Maria Vattalil as a martyr.

In the audience, was seated her killer Samandar Singh. Next to him sat the Blessed Maria’s sister, Sr Selmi. “I cannot undo what happened. That was also God’s call. This, too, is God’s call. She was a saint, and now she’ll be declared one too,” said Samandar who had stabbed her viciously 22 years ago. He was sentenced to life but was released in 2002 after Sister Selmi visited him in jail and asked that he be pardoned.

Beatification is one step away from Canonisation, and Sister Maria is the first nun from north India to be Beatified and the seventh Indian to be beatified after Sister Alphonsa, Fr Kuriakose Chavara, Mother Euphrasia, Fr Joseph Vaz, Fr Gonsalo Garcia and Mother Teresa. The ceremony was held St. Paul’s HS School in the presence of Cardinal Amato, Prefect of the Congregation for Cause of Saints (Vatican), and 45 bishops and five cardinals from India.

Just before Gloria (singing praises of God), Cardinal Amato read out the apostolic letter in Latin, announcing Pope Francis’s declaration that Sr Rani Maria be called Blessed and her feast may be celebrated every year on February 25 — the day she was martyred in 1995. The Cardinals, Archbishops and Bishops arrived in the form of a procession.

Right after the announcement, a relic and a large portrait of Sister Maria were brought to the altar by the family members, representatives from the church in Kerala and representatives of Sr Rani Maria’s Franciscan Clarist Congregation. Cardinal Angelo Amato said, “She’s not just an inspiration to Udainagar church but to Catholics across the globe. Her sacrifice has become a beacon of light for missionaries. “ 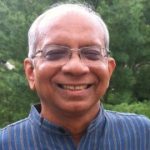 On January 9th 2017, in an address to the members of the Diplomatic Corps from 181 countries accredited to the Holy See, Pope Francis said, “children and young people are the future; it is for them that we work and build. They cannot be selfishly overlooked or forgotten…I consider it a priority to protect children, whose innocence is often violated by exploitation, clandestine and slave labour, prostitution or the abuse of adults, criminals and dealers in death.” and further, “I think of the young people affected by the brutal conflict in Syria, deprived of the joys of childhood and youth, such as the ability to play games and to attend school”. His message was loud and clear, a necessary step for security and peace everywhere, is to invest in children and particularly those who are directly affected by the numerous wars and conflicts of our time.

Pope Francis has been consistent in his focus on the painful reality of migrant children. On January 15th 2017, the Catholic Church will once again observe the ‘World Day of Migrants and Refugees’ and in a hard-hitting message for the day on ‘Child Migrants, the Vulnerable and the Voiceless’ Pope Francis writes, “I feel compelled to draw attention to the reality of child migrants, especially the ones who are alone. In doing so I ask everyone to take care of the young, who in a threefold way are defenseless: they are children, they are foreigners, and they have no means to protect themselves. I ask everyone to help those who, for various reasons, are forced to live far from their homeland and are separated from their families”.

There are today innumerable stories on the suffering of children who are in the midst of war or are fleeing war and persecution. From Syria to Myanmar; from Congo to Colombia; from Afghanistan to Sudan – the plight of migrant children labouring long hours in sweatshops; toiling in fields; begging on streets; or just left to the vagaries of hostile environments could make the coldest hearts thaw. The dead body of Aylan Kurdi, the three-year old Syrian child, which was washed up on a beach in Turkey early in September 2015, will forever be etched in the memory and conscience of anyone who cares.

The UN Refugee Agency (UNHCR) states that, “Over half of the world’s refugees are children. Many will spend their entire childhoods away from home, sometimes separated from their families. They may have witnessed or experienced violent acts and, in exile, are at risk of abuse, neglect, violence, exploitation, trafficking or military recruitment”. Pope Francis reiterates this situation in his message also emphasizing that these children are deprived “of rights intrinsic to childhood as sanctioned by the International Convention on the Rights of the Child”.

Pope Francis calls upon the Christian community and the world at large to respond to the reality of the migrant children by working towards protection, integration and long-term solutions.

He highlights the importance to adopt “every possible measure to guarantee the protection and safety of child migrants, because these boys and girls often end up on the street abandoned to themselves and prey to unscrupulous exploiters who often transform them into the object of physical, moral and sexual violence.” He does not mince words when he says, “if more rigorous and effective action is not taken against those who profit from such abuse, we will not be able to stop the multiple forms of slavery where children are the victims”.

The integration of migrant children is also essential; to have adequate policies and also the necessary financial resources to ensure for their assistance and inclusion. All are aware of how several ‘host countries’ create all possible obstacles to deny refugee children with appropriate formal education, healthcare and even with much –needed recreational facilities.

Finally, Pope Francis makes “a heartfelt appeal that long-term solutions be sought and adopted. Since this is a complex phenomenon, the question of child migrants must be tackled at its source. Wars, human rights violations, corruption, poverty, environmental imbalance and disasters, are all causes of this problem… far-sighted perspectives are called for, capable of offering adequate programmes for areas struck by the worst injustice and instability, in order that access to authentic development can be guaranteed for all. This development should promote the good of boys and girls, who are humanity’s hope”.

A visionary but strong challenge indeed! The moot point, as we observe the World Day of Migrants and Refugees, is to ask ourselves and those in power, whether enough is being done for the voiceless, vulnerable and invisible child migrant of today?  And if not, to get involved in more concerted action now!

Fr Cedric Prakash SJ is a human rights activist. He is currently based in Lebanon, engaged with the Jesuit Refugee Service(JRS) in the Middle East on advocacy and   communications. 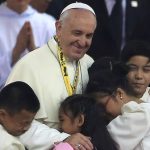 The full text of the Message of Pope Francis for World Day of Migrants and Refugees (January 15th 2017) can be found on https://w2.vatican.va/content/francesco/en/messages/migration/documents/papa-francesco_20160908_world-migrants-day-2017.html

Please click on the below image to read the entire Pope Francis’ new apostolic exhortation, Amoris Laetitia (The Joy of Love), released April 8, 2016 to Bishops, Priests, Deacons, Consecrated persons persons, Christian Married couples and all the lay faithful on LOVE IN THE FAMILY.

Please click on the below image to read the summary Pope Francis’ new apostolic exhortation, Amoris Laetitia (The Joy of Love), released April 8, 2016 to Bishops, Priests, Deacons, Consecrated persons persons, Christian Married couples and all the lay faithful on LOVE IN THE FAMILY.

The Diocese of Metuchen, NJ has made arrangements for bus transportation to the Papal Mass on September 27, 2015 in Philadelphia from various locations throughout the diocese. A number of parishes/groups are also running bus trips to the Papal Mass (check with your parish). The Papal Mass is scheduled for 4:00 pm on Benjamin Franklin Boulevard, Philadelphia. Once we have a clear picture of the number of people who want to participate from each site, we will assign bus coordinators and send confirmation materials with precise details. Prayer and reflection resources will also be provided to enable pilgrims to share a common experience as the Diocesan Church in preparation for and on the day of this special event.

The round trip bus reservation and pilgrimage package will be $55. per person. Each participant is responsible for their own meal costs on that day and also any train/shuttle expenses from the parking lot to the event site and back. Pilgrims should be physically fit and prepared to walk several miles. Reservations for bus seats are limited and will be accepted on a “first-come first-served” basis. For those interested in reserving a bus seat, you may do so starting on July 8, 2015 using the preferred online method by visiting: www.diometuchen.org/WMOF

You may also register via phone by calling 732-562-1990 ext. 1543 during the hours of 10am -1 pm, Monday thru Friday starting on July 8, 2015. All payments will be by credit card only. Space is limited. There will be no refunds. Once the seats are filled, a waiting list will be formed. All participants must make payment and agree to the Trip Terms and Conditions before reservations will be confirmed. Additional details regarding the Pilgrimage will be sent out at the end of the summer.

Thank you Sr. Ruth Bolarte I. H. M., Director for the above information.

Schedule: 2015 Apostolic Journey of Pope Francis to the United States of America

Here is the schedule for Pope Francis’ September 2015 Apostolic Journey to the United States of America as released by the Vatican on June 30, 2015.  All times listed are Eastern Daylight Time.

I have just finished reading the internet copy of Pope Francis’ ENCYCLICAL LETTER LAUDATO SI’ “Praise be to you, my Lord”. At the Encycle ends with two beautiful prayers, which I have translated into Gujarati. Here below please see A PRAYER FOR OUR EARTH both in Gujarati and in English. 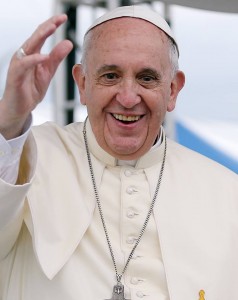 A PRAYER FOR OUR EARTH

All-powerful God, you are present in the whole universe

and in the smallest of your creatures.

You embrace with your tenderness all that exists.

Pour out upon us the power of your love,

hat we may protect life and beauty.

Fill us with peace, that we may live

as brothers and sisters, harming no one.

O God of the poor,

help us to rescue the abandoned and forgotten of this earth,

so precious in your eyes.

Bring healing to our lives,

that we may protect the world and not prey on it,

that we may sow beauty, not pollution and destruction.

of those who look only for gain

at the expense of the poor and the earth.

Teach us to discover the worth of each thing,

to be filled with awe and contemplation,

to recognize that we are profoundly united

as we journey towards your infinite light.

We thank you for being with us each day.

Encourage us, we pray, in our struggle

for justice, love and peace. 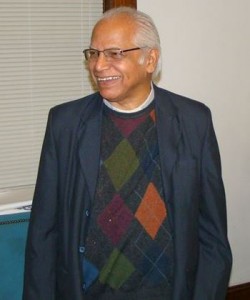