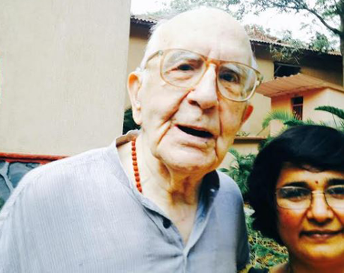 NAVI MUMBAI: The affable Jesuit priest of Spanish origin, Father Federico Sopena Gusi, who had struggled for 38 years to become a naturalized Indian citizen last year, passed away due to old age related ailments on Wednesday. He was 91.

Raigad-based activists and social workers have expressed sorrow at the passing away of Fr Sopena, since he had actively worked for the welfare of the poor Katkari tribals in the region for several years.

Talking to TOI, the Pen based activist Vaishali Patil said: “We are all very sad to hear about the demise of Fr Sopena, who was a phenomenal human being working for the downtrodden. I knew him for over 25 years while closely working for the welfare of the poor adivasis (tribals) in Raigad. Born in Barcelona (Spain), Fr Sopena had been living in India since 1948, but he got the Indian citizenship only in April 2016 and he was so happy that he shouted ‘Bharat Mata ki jai!’, while we were in the office of Mumbai suburban district collectorate last year.”

Patil had personally intervened and helped the Jesuit priest acquire the Indian citizenship by writing several letters to the government department concerned, and painstakingly collating all the required documents, since the original file with all the certificates of Fr Sopena was earlier misplaced and declared as missing by the government bureaucrats.

A member of Society of Jesus, Fr Sopena was “in love” with India and had a good command over the Hindi language.

Fr Sopena had in last April said “I can now die peacefully in my India. I love India, as I have spent over 67 years here.” He had further elaborated: “The great Indian poet, Kabir, had once said that you will be at peace if you have repaid all your loans and died in your motherland. That is why i am ‘bahut khush’ (very happy) to become a naturalized Indian!”

Patil recalled: “Two decades ago, Fr Sopena had lost one leg in a motorcycle accident while he was going from Pen to Panvel on the Mumbai-Goa highway. Despite living with an artificial Jaipur foot, he was always enthusiastic about life and his work. All the people and activists in Raigad have fond memories of him. May his soul rest in peace.”