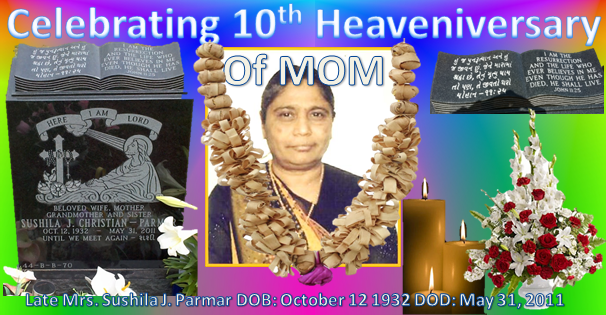 Its ten years today when on May 31, 2011 our mummy, Late Mrs. Sushila Joseph Parmar went heavenly abode. We are free to select our friends, our spouse but not our parents or siblings. Blood relations are created by God only and not by human. Only God has a control on those relations and only he decides the worldly length of that relation. My mom lived her life of 78 years and 6 months with blessing of God. Her right side of body was paralyzed after she suffered a stroke in 1995. But she accepted that challenge and was able to walk with cane and was doing most of her daily routine on her own.

We cannot write enough for our mom, the sacrifices, nursing and care, love, teaching and so many things. We all have heard a phrase that “God cannot be everywhere so he created MOM”.

We are five brother and sisters have created a small tribute to dedicate to our mom on her 10th Heaveniversary, song written and sung by her children. 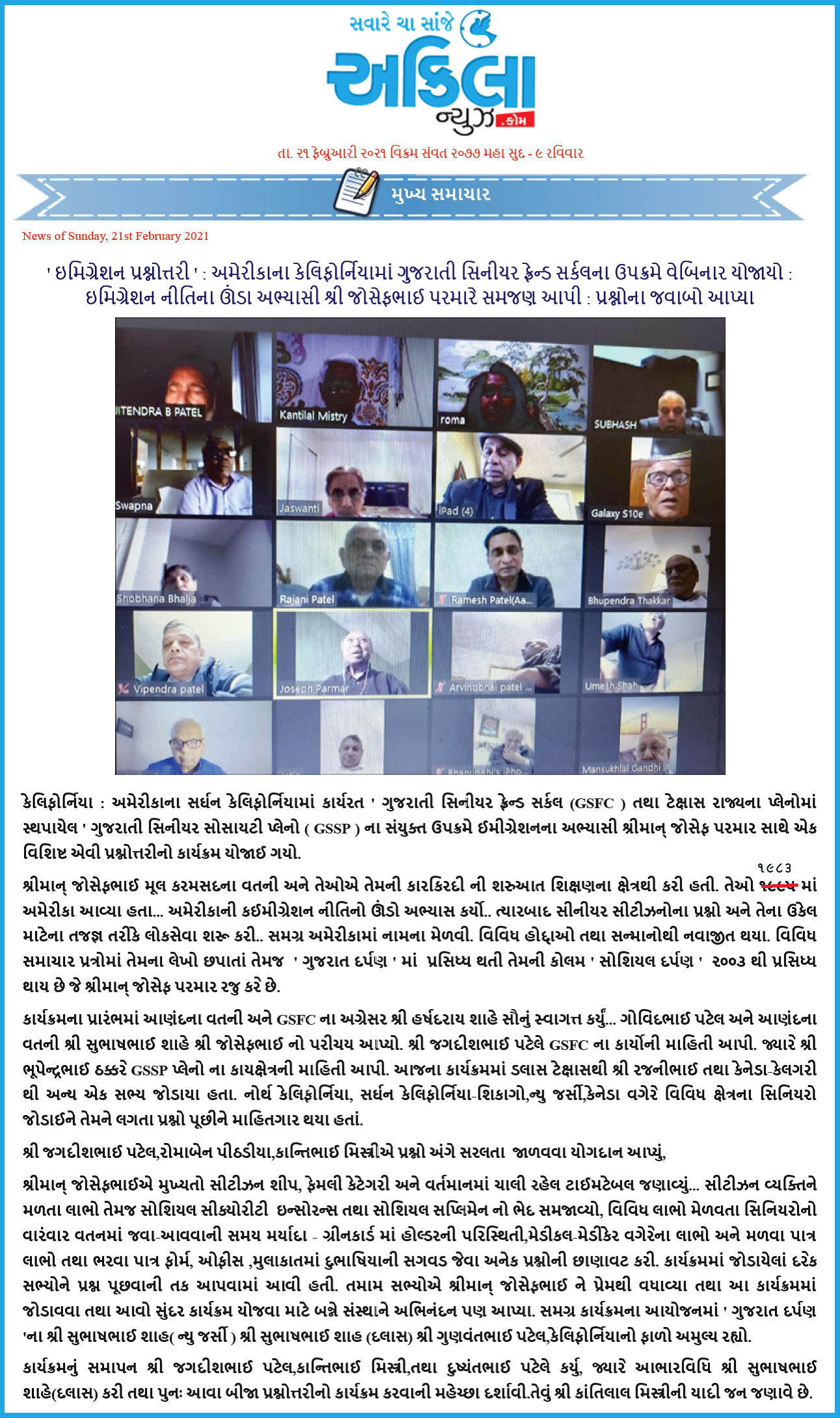 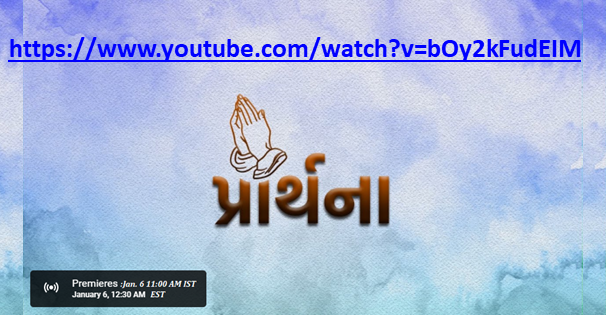 All Glory and Praises to Lord Jesus Christ for this dream to come true that started almost 25 years ago! As a family we have always enjoyed singing Church hymns-bhajans in our native, the beautiful language Gujarati! My father Mr. Joseph Beda Parmar lead the Church choir in my younger days and my elder brother Jagadish Christian followed his footsteps. I have been a huge fan of Motabhai Jagadish’s melodious voice.

While leaving in Jersey City, NJ, we met Mr. Michael Scribe, a musical Maestro who has traveled many parts of the world with various orchestras in his younger days. His musical abilities prompted me to this dream of having an album composed by Mr. Scribe and sung by Mr. Jagadish Christian. Well, somehow this dream stayed undercover and finally we are here with different singers!

Special Thanks to Shane Macwan

All Glory and Praise to Lord Jesus Christ. Special thanks to The Most Reverend, Athanasius Rethna Swamy, the fifth Catholic Bishop of Ahmedabad Diocese, Gujarat, India for his Blessings and well wishes. Many thanks to Shailesh L. Macwan for being my “TWIN”, my hands and feet in India and working tirelessly day and night, countless hours at times, during these difficult times of COVID-19. I am so thankful for helping me to make my dream of 25+ years come true! Many thanks to my loving dad Mr. Joseph Beda Parmar whose love for God, family, music and community has been my role model throughout my life. I want to thank my brother Jagadish Christian whose melodious voice, love and knowledge of music has always inspired me throughout my life. And lastly, I am very thankful to my wife Ila, daughters Christine, Stephanie and Sydney along with all other family members and friends for their loving support.

My uncle Mr. Ignasbhai Bedabhai Parmar passed away on April 25, 2020. 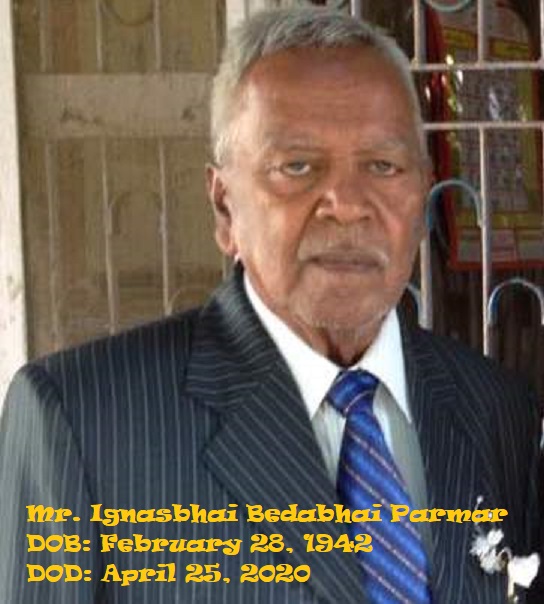 Spanish Jesuit missionary Father Lopez De Pariza came to India in 1951 at the age of 34.

An unusual heatwave made March unpleasant in India’s western Gujarat state. But Jesuit missionary Father Lopez De Pariza is undeterred as he sits by the side of an open window continuing his routine — reading the newspaper.

At the third floor of the Jesuit residence, Father Pariza walks daily to their small library with help of a walker. At the age of 100, this is part of his exercise. And then he immerses himself in the paper until he reads every page.

A movement inside his room makes him look up. “My name is Lopez. I am a 100 and not out.” As if by instinct, his first words were in Spanish, his mother tongue.

Father Pariza came to India from Spain in 1951 at the age of 34. On May 13 this year, he turns 100. His fellow priests and former parishioners are planning a celebration to mark the occasion.

Among the 12 Jesuits at the residence in Anand district, Jesuit Brother Saul Abril is the closest to Father Pariza. Brother Abril is a fellow Spaniard and just 14 years younger. They can speak both local Gujarati and Spanish with the same fluency.

Brother Abril is happy that Father Pariza’s 100th birthday celebrations will coincide with Pope Francis’ visit to the Fatima shrine in Portugal. The papal visit will mark the centenary of the apparition of Our Lady to three shepherd children.

The same day when Pope Francis is scheduled to offer a midnight Mass at a farming town, parishioners back in Anand, the “milk capital of India,” will celebrate the life of a missionary they have cherished for three generations.

The babies born when Father Pariza arrived in India are now in their late 60s, their parents are dead or ailing and they are having grandchildren. All remember how Father Pariza cycled to their parish and spent time with them.

Local people in Kheda region vouch for Father Pariza’s sharp memory. He could remember three generations of each member of his parish — nearly 5,000 Catholics — by their first name.

Though the Jesuit priest has fought age head on, he has had a few falls late last year that have left him with partial memory loss. A reason why Father Pariza has his portrait on his door is so that he can identify his room each time he walks along the veranda.

But now he has backup: Samuel Jivabhai Christian, the caretaker of the residence. Samuel has been with him since 1994 and each morning accompanies him as he walks to the library for his routine reading.

When certain news stories upset him, Father Pariza shares his frustration with Samuel. Today the aged man is angry that an airline company did not allow two teenage girls to board a flight because they were wearing leggings. “How can anyone dictate what to wear or where to go,” Father Pariza asked Samuel.

Born in Bilbao, the capital city of Biscay, a province of Spain located just south of the Bay of Biscay, newspapers have been Father Pariza’s source of information about the world while living in this remote corner of India.

He grew up to become an industrial engineer but joined the Jesuits and became a priest in 1933. He witnessed the 1936 Spanish Revolution when he was in Belgium learning Latin. Nearly 8 million people participated directly or indirectly in the Spanish Revolution but in less than nine months it was crushed.

After being ordained a priest, his choice was to go to Japan or China. But Father Pariza was instead sent to India and arrived in Mumbai on Jan. 26, 1951; exactly one year after India was declared a republic. Since then he has been in and around the Kheda regions of Gujarat.

Jayesh Macwan, a 40-year-old Catholic and electrician in Anand says he remembers how Father Pariza used to roam around on an Indian bicycle and pray at any time of the day.

Inside the kitchen, a middle-aged woman cleaned cauliflowers, tomatoes, carrots and potatoes. “Some of these will be cut and boiled for Father Pariza,” she said.

Brother Abril cuts in to explain the diet of his special companion. “He has a good appetite. He eats well and likes good food but as usual we all avoid spicy food. She knows that,” he said.

The temperature outside unusually soared to 43 degrees Celsius but Father Pariza was still glued to the newspaper — reading the sports page — most probably sensing an Indian victory over the Australians in the test match at Dharamshala.

My father Mr. Joseph Parmar paid visit to 99 years old Fr. Pariza during his visit to India in March 2017 and remembered the old memories.