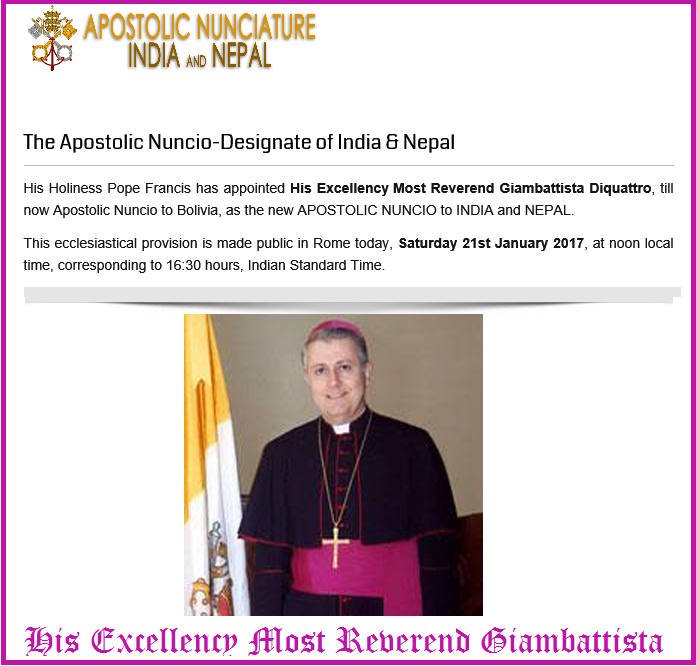 Mumbai, Jan 21: His Holiness Pope Francis has appointed His Excellency Most Reverend Giambattista Diquattro, till now Apostolic Nuncio to Bolivia, as the new APOSTOLIC NUNCIO to INDIA and NEPAL.

Pope has appointed Archbishop Giambattista Diquattro as the new apostolic nuncio to India and Nepal.

The 62-year-old Italian prelate is currently the nuncio to Bolivia, a country in central South America.

The new nuncio is expected in India mid-February, sources in the apostolic nunciature told Matters India.

Archbishop Diquattro, who was ordained a priest 35 years ago, has been a bishop for 11 years.

He was on March 18, 1954, in Bologna, the capital and the largest city of the Emilia-Romagna region in northern Italy. It is the seventh most populous city in Italy.

He was appointed apostolic nuncio to Panama on April 2, 2005.

On January 19, Cardinal Oswald Gracias, a papal adviser, told Matters India that the Indian government had cleared the nuncio’s name.

India has been without a Vatican ambassador since early October when Archbishop Salvatore Pennacchio, who was the Apostolic Nuncio to India and Nepal for six years, left for Poland.

The new nuncio is taking over at a time when India is preparing to receive Pope Francis, who has shown interest in visiting the country.

India witnessed three papal visits so far. The first Pope to visit India was Pope Paul VI, who came to Mumbai in 1964 to attend the International Eucharistic Congress.

Several Indian dignitaries have, from time to time, called on the Pope in the Vatican. The latest was federal External Affairs Minister Sushma Swaraj, who led the Indian delegation at the canonization of Mother Teresa on September 4, 2016, at the Vatican.

Prime Minister Indira Gandhi me the Pope in 1981, and I.K. Gujral, another premier, in 1987. Atal Bihari Vajpayee, who was the prime minister three times, called on the Pope in 2000 during his official visit to Italy.

The Vatican has a nunciature in New Delhi while India has accredited its embassy in Bern, Switzerland, to the Holy See as well. India’s current ambassador to the Holy See is Smitha Purushottam since September 2015.

The Vatican-India bilateral relations was formally started on June 12, 1948, nearly a year after India became an independent nation. However, an apostolic delegation existed in India from 1881. The apostolic delegation to the East Indies then included Ceylon (now Sri Lanka), and was extended to Malaca in 1889, and then to Burma in 1920.

The connections between the Catholic Church and India are traced to Saint Thomas the Apostle, who, according to tradition, came to India in 52 AD.

Bishops were sent to India from Syria as early as the 6th or 7th centuries. There is a record of an Indian bishop visiting Rome at the time of Pope Callixtus II (1119–1124).

News from Mr. William Parmar. Thanks