67-year-old Sr. Infant Tresa says yoga has been her constant companion along with the Bible. 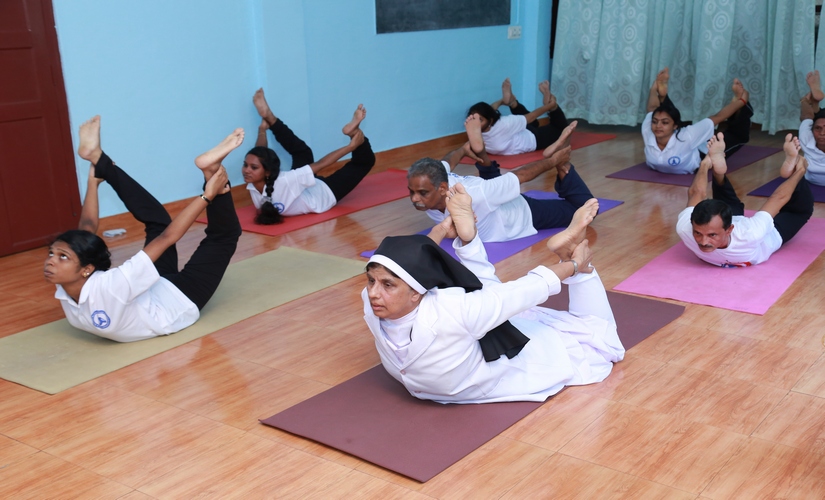 A difference among Church groups and objections raised by some denominations against Yoga has not prevented this Catholic nun, from Central Kerala, from practicing and popularising the ancient form of exercise.

67-year-old Infant Tresa, a member of the Franciscan Clarist Congregation (FCC), one of the largest women’s religious gatherings in the country, feels that ‘Yoga is secular’ and ‘it does not belong to any particular religion.’

This confidence has given her strength to practice yoga for the last 30 years and provide training to over 5,000 people so far, irrespective of their religion, gender and age.

After retiring as a nurse from the government sector in 2006, Sister Tresa has dedicated her life completely to promote yoga and meditation and started two centres for it at Muvattupuzha and Thodupuzha in central Kerala.

As the country celebrates yet another International Yoga Day today, the nun says her strong faith in Yoga came from her own personal experience.

She also admitted that many Church groups still have ‘misconceptions’ about Yoga and its practice.

However, her own Congregation is extending complete support for her new role as ‘yoga trainer,’ she said.

“I learnt Yoga in 1985 and have been practising it since then. I was suffering from severe back pain and wheezing at that time. I tried many medicines but got no relief,” Sister Tresa told PTI.

“It was Yoga which brought me relief. After knowing about this ancient form of exercise through a newspaper, I tried to learn and practice it regularly.. and the result was amazing,” she said.

The nun claimed that her health issues-both back pain and wheezing-reduced step-by-step and she got completely cured within months.

Since then, yoga has been a constant companion of Sister Tresa, along with the Bible.

As her love for Yoga grew, she tried to gather as much information as possible from books and underwent a training programme in Bengaluru after availing three months leave from her nursing profession during the 1980-90 period.

After retirement, she has been travelling extensively in and outside the state to take classes on yoga and attending seminars and conferences.

Even at this age, the sexagenarian spends at least three hours for yoga practice and takes at least one of the three daily sessions at her yoga centres.

As a regular practitioner of yoga and meditation for over three decades, the nun said she found it difficult to understand why people were making unnecessary hue and cry over it.

“Those who call yoga a part of Hinduism and raise objections against it, do not know what it actually is.. Yoga does not belong to Hinduism or any other religion.. It is completely secular,” she said.

It is a physical, mental and spiritual practice, which originated in ancient India and there was no need to mix religion with it, the nun said.

Sister Tresa’s word assumes significance in the wake of the recent stand taken by Syro Malabar Church, a prominent church denomination in Kerala that ‘yoga and Catholic faith cannot go together.’

A report by the doctrinal commission of the Syro-Malabar Church had underlined the views expressed by its Synod last year that yoga is not a medium to attain divine experience.

However, Sister Tresa said the number of Christians and Muslims learning Yoga was on the rise, besides Hindus.

When asked whether she had faced any objections when she started training yoga, she said it was natural to face some resistance in the initial phase but her Congregation, bishop and colleagues have extended her all support.

“I am not defying any rules of the Church. I do not use any particular mantra or pictures of any God or goddesses, while practicing or training yoga and meditation,” she said.

Performing yoga with the accompaniment of any particular mantra or practicing ‘secular yoga’ (sans any mantra or prayer) are also not wrong.

“Doing yoga is more important.. mantra, prayer or pictures are just tools that can be used according to individual choices,” she said.

Seeing people experience physical and mental relief through yoga is the happiest part of the stint as yoga trainer, said Tresa who had joined the Congregation embracing nun-hood at the age of 19.

One thought on ““Yoga Is Secular”, Says Kerala Nun, A Yoga Teacher since 30 Years – News from NDTV”