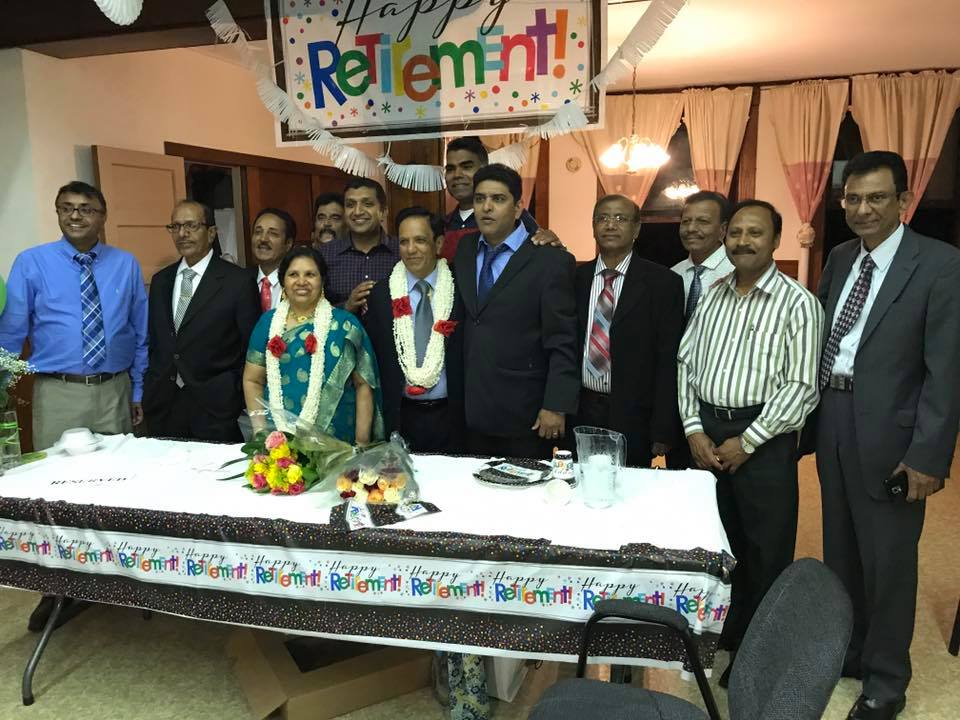 The Rev. Timothy Rathod, the Pastor of the Emmanuel United Methodist Church in Evanston (Illinois) will be retiring with his last scheduled day in office being June 30, 2017. He has faithfully and gracefully served as the Lord’s chosen shepherd for the last 20 years at the Emmanuel UMC and his laudable ministry accounts for almost 45 years of his altruistic Christian service.

On June 24, 2017 at 6:00 p.m. the entire EUMC family comprising members, friends, district leadership, community leaders, retired and active pastors, children, youth et al. gathered together at EUMC (Evanston) in a Christian Worship Service to thank God and to honor the Rev. Timothy Rathod for his faithful ministry. The United Methodist Chicago Northwestern District Superintendent the Rev. Dr Zaki L. Zaki exclaimed joyfully, “This is the day that the Lord has made!” before thanking God, in the opening prayer, for leading His faithful servant the Rev. Timothy Rathod. The EUMC choir delivered a soulful rendition of “How Great Thou Art” (Hymn 77) followed by a Hindi Hymn “Stuti Aaradhana Upar Jaati Hai…”

The Rev. Scort Christy, who will be assuming the responsibilities of a pastor at EUMC from July 1, 2017 (Saturday), quite befittingly read the Scriptures from 2 Kings 2: 1-2, 6-14 emphasizing transfer of power from prophet Elijah to Elisha. The Rev. Dr Snehalata Patel, in her prayer, petitioned for the retiring and incoming pastors and their families, the Church universal, our nation, our leaders, the United Methodist Church and wisdom for EUMC congregation to espouse the transition of spiritual leadership.

The Rev. Timothy Rathod, started his homily by an impactful Hindi poem on friendship. He confessed that despite his 3-week preparation, it is excruciatingly difficult to give a parting sermon. He also made it absolutely clear that his departure shall bear no resemblance to that of prophet Elijah and not to expect any chariots of fire but simply a moving van! However, he carefully pointed out that he and the Rev. Scort Christy have learned from each other, studied and worked together for over 20 years to glorify the same almighty God whose grace sustains us all. Reflecting on his life, the Rev. Timothy Rathod described his long, arduous journey from his birth in a small village in India to USA; an impossible task without divine sustenance. He thanked his mother, the late Rami Ma; uncle, the late Rev. Aashirvad Kunjravia; his cousin, the Rev. Dr Snehlata Patel; his brother-in-law, the Rev. Anil Patel; his elder brother, the Rev. Dr John Rathod; his elder sister, Mrs Savita Macwan; his sister-in-law, Mrs Purnavati Rathod; and his wife, Mrs Vijya Rathod for being the guideways of his early spiritual life. He thanked his two sons, Vincent and Joy; the communities that he served in and all persons, too many to list, from a truly grateful heart. In his unique way, he elucidated that sadness is only a human feeling and that sorrow has no place to anchor in the hearts of those who have eternal hope in Christ. As he retires, the Rev. Timothy Rathod assured the congregation that he leaves them in good hands of the new pastor. He ended his sermon by saying, “May God be with you. You are in our prayers and we need your prayers!” and humorously added, “Now I plan to catch up with my sleep for 3 months!”

The president of EUMC Men’s Group, Mr Joy Christy thanked all present for joining in the special Worship Service and marvelled at all the good work done by the retiring pastor. He wished him a restful, healthy and happy retirement while continuing to serve in other God-chosen ways. The co-chairperson of EUMC Women’s Group, Mrs Ruth Varma thanked the Rev. Timothy Rathod for his encouraging support for EUMC Women’s Group, Bible Study Group, UM Women’s District Meetings, Summer Camps, Indian Christian Federation of Midwest and annual EUMC Christmas celebrations. She wished him, “A Healthy and Happy Retirment!”

Mrs Pankuvar Dave and Mrs Kripaben Christian, representing the Senior Citizen’s Group of EUMC, presented their handmade ethnic Indian garlands to the Rev. Timothy Rathod and Mrs Vijya Rathod. Mrs Smita Christian, co-chairperson of EUMC Women’s Group, presented a framed copy of the Pastor’s retirement speech at the 2017 Annual United Methodist Northern Illinois Conference. Mrs Abigail Christian presented a copy of a special song written in praise of the retiring pastor. Mrs Savita Macwan and Mrs Smita Christian presented a banner emblazoned with “29 ¼ Years of Ministry” (in Methodist Church) and depicting picture of the retiring pastor from his early days in ministry, a most recent picture and a picture of the pastor with the EUMC Women’s Group.

The Rev. Dr John Rathod thanked God for all those in attendance at the special Worship Service. He, being an elder brother of the retiring pastor the Rev. Timothy Rathod, gave descriptive details of their early bucolic (rural) life with farmer parents who were strong believers of Christ. He described the journey of the Rev. Timothy Rathod and his wife Mrs Vijya Rathod, highlighting their honest hard work. He humorously admonished his retiring younger brother saying, “You retire now from Church’s work but not from God’s work yet!” He thanked Mr Babu Varma, former chairperson of the EUMC Council, for the fantastic work done by him in coordinating a souvenir brochure with good retirement wishes for the retiring pastor and his family.

The Rev. Dr Zaki L. Zaki (District Superintendent of Chicago Northwestern District), described the Rev. Timothy Rathod as “A grounded, wise, trusted and an outstanding spiritual leader of the Northern Illinois Conference.” In honor of the ministry of the Rev. Timothy Rathod, the Rev. Dr Zaki L. Zaki announced the formation of an “Annual Leadership Training Institute,” partially funded by the general church, to support and grow Asian pastors and leaders. Following this exciting announcement, he requested all pastors present in the congregation to come forward and lay their right hand on the incoming pastor the Rev. Scort Christy. Over 14 pastors then came forward and led the congregation in prayer for the new incoming pastor the Rev. Scort Christy and his wonderful wife Mrs Joyas Christy. The Rev. Timothy Rathod expressed his confidence in the Rev. Scort Christy and described Mrs Joyas Christy as, “A person who has the heart to serve people the way Jesus demonstrated in this world.”

Mr Ravi Cornelius, the Chairperson of EUMC Council, said that the Rev. Timothy Rathod always brought a “Calming Smile” that diffused any emotionally charged atmosphere at the Council meetings, which do not always progress smoothly. He was also immensely grateful to the pastor for having taught the basics of living a Christian life by ministering as a pastor to both his children, who have now grown into promising adults. On behalf of the congregation, Mr Ravi Cornelius and Mrs Meena Parmar, presented a Cross and a chain to the Rev. Timothy Rathod and a set of earrings to Mrs Vijya Rathod.

Mr Babu Varma, former chairperson of the EUMC Council, called the Rev. Timothy Rathod “A great shepherd.” He also thanked all well-wishers and sponsors of the souvenirs, wished a “Happy Retirement” and prayed for “God’s Bountiful Blessings” for the retiring pastor and his family. A montage of the pictures of the retiring pastor and his work throughout his ministry was displayed on the projector screen accompanied by a touching song with apt lyrics “A job Well Done!”

The Rev. Anil Patel led the worshippers into a closing prayer and pronounced the benediction. He described the Rev. Timothy Rathod as “A God-fearing, Ideal and Successful Minister.” He further added, “EUMC will treasure the work done over a period of over 20 years by the Rev. Timothy Rathod and hold it as a cherished jewel to guide all future pastors following in his footprints.”

No gathering at EUMC, certainly not of this magnitude, could have been complete without a delicious meal. After the Worship Service, all attendees joined in informal fellowship and a dinner featuring some mouth-watering, finger-licking dishes cooked by Mrs Joyas Christy and her crew. A great farewell to a faithful shepherd, the Rev. Timothy Rathod: We wish him and his family a Happy and Healthy Retirement. 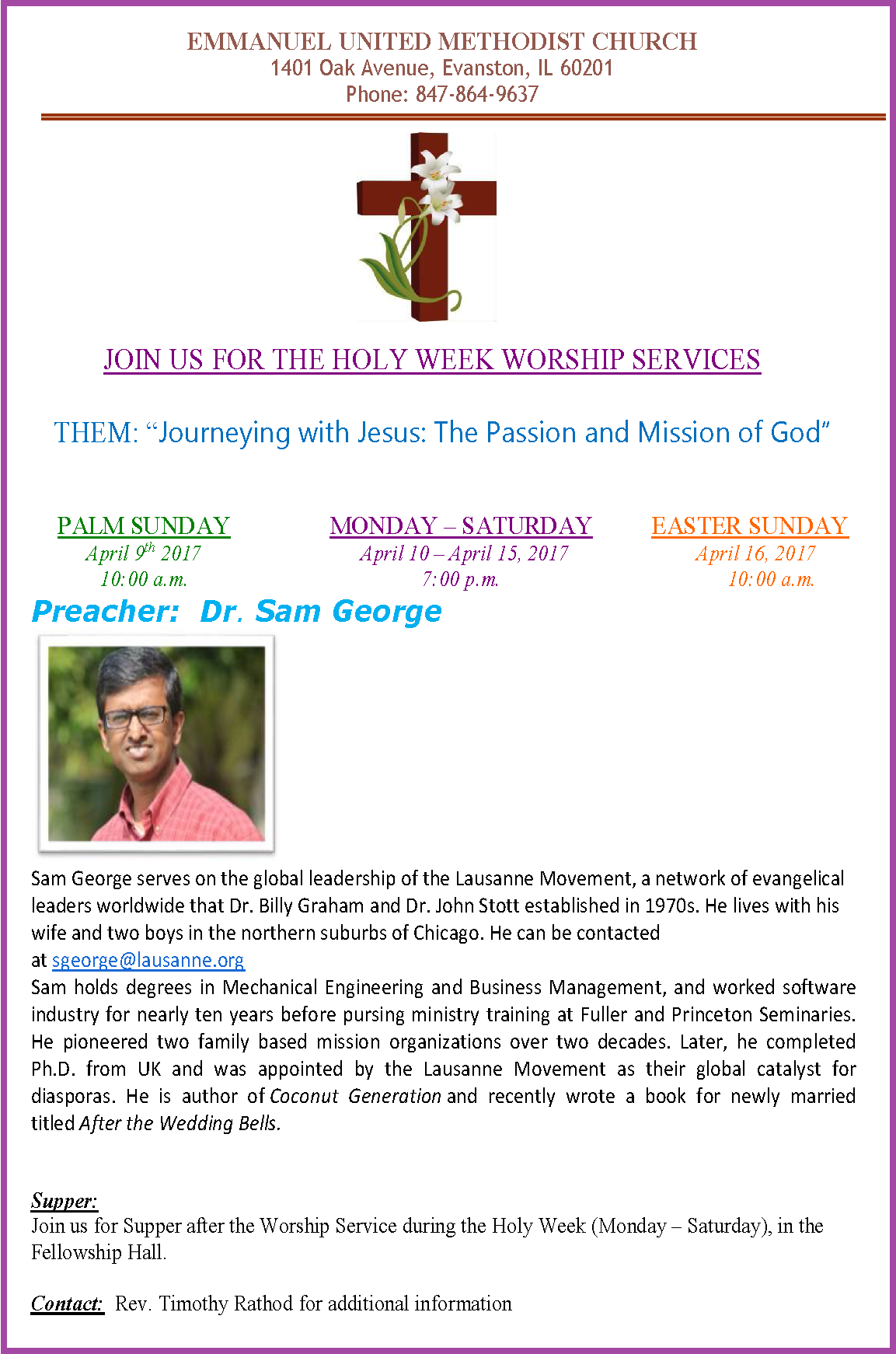 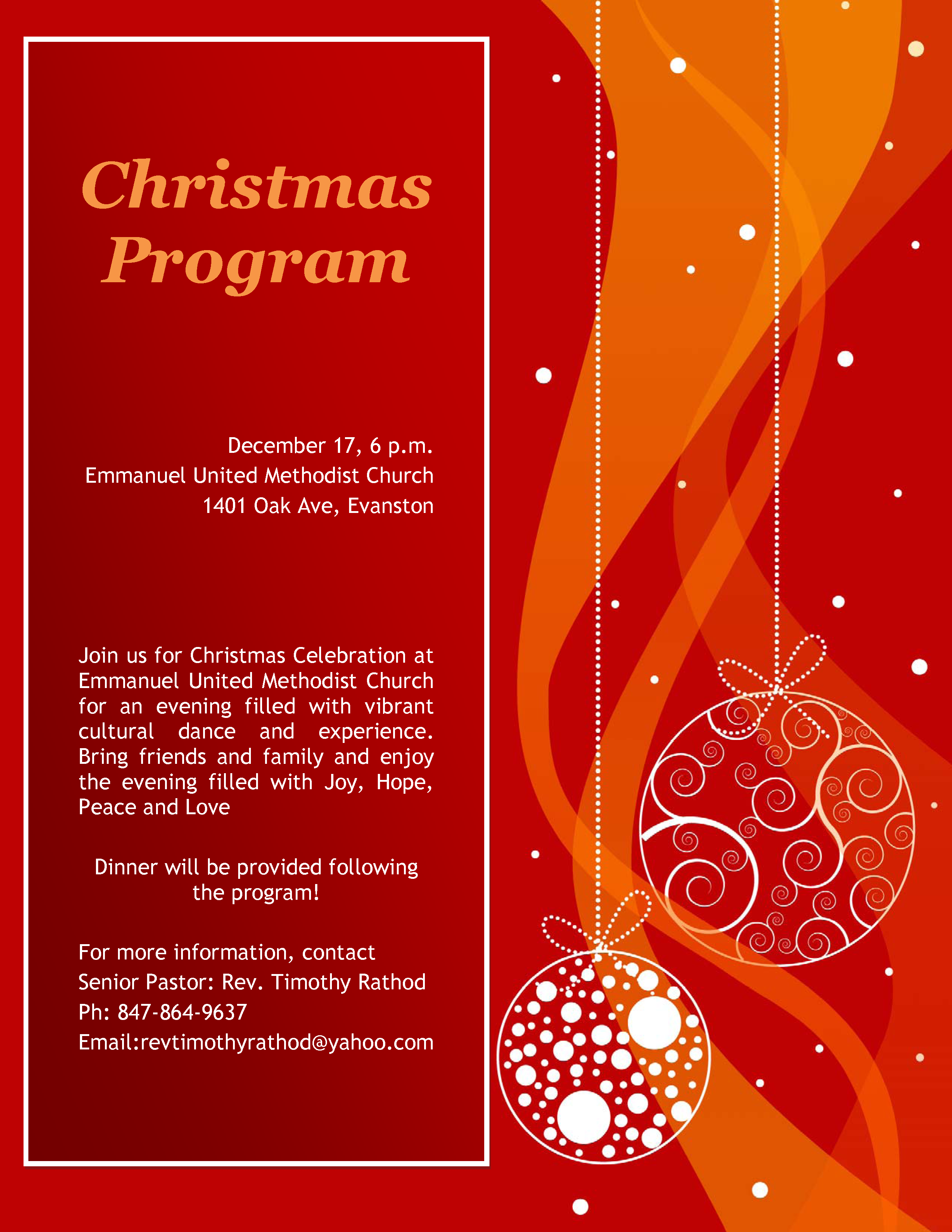 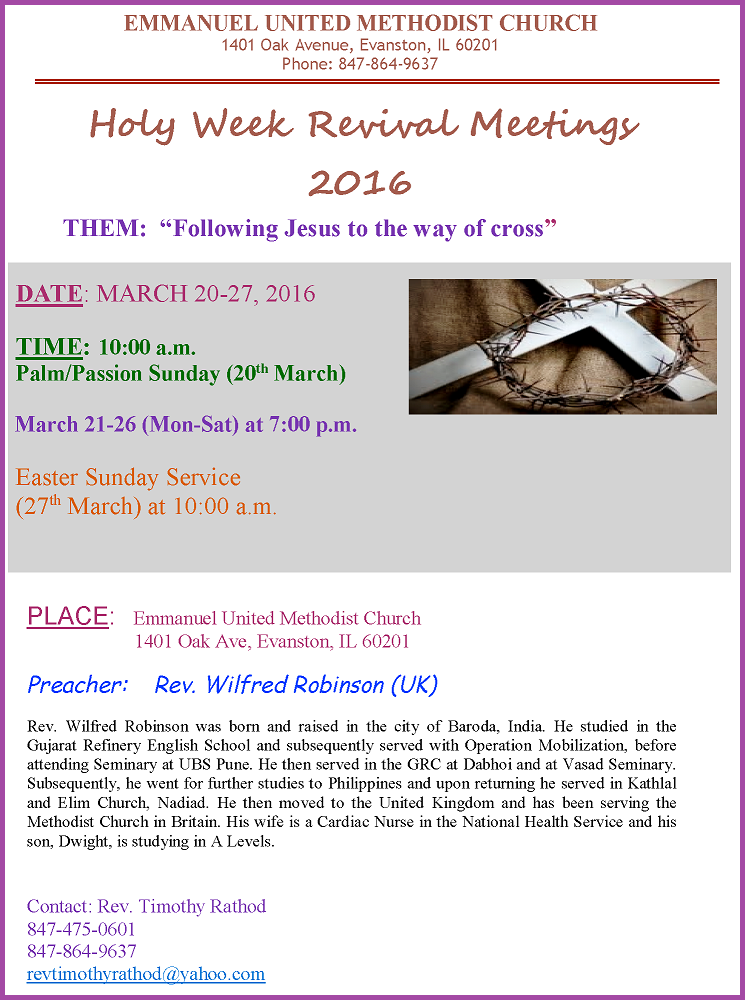 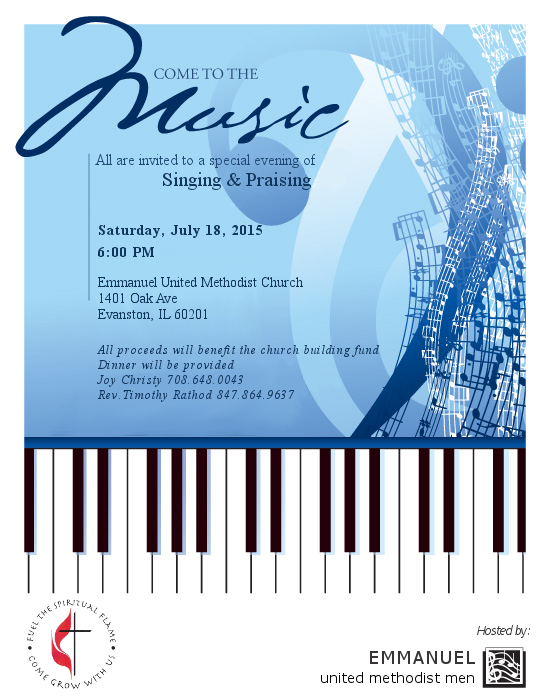