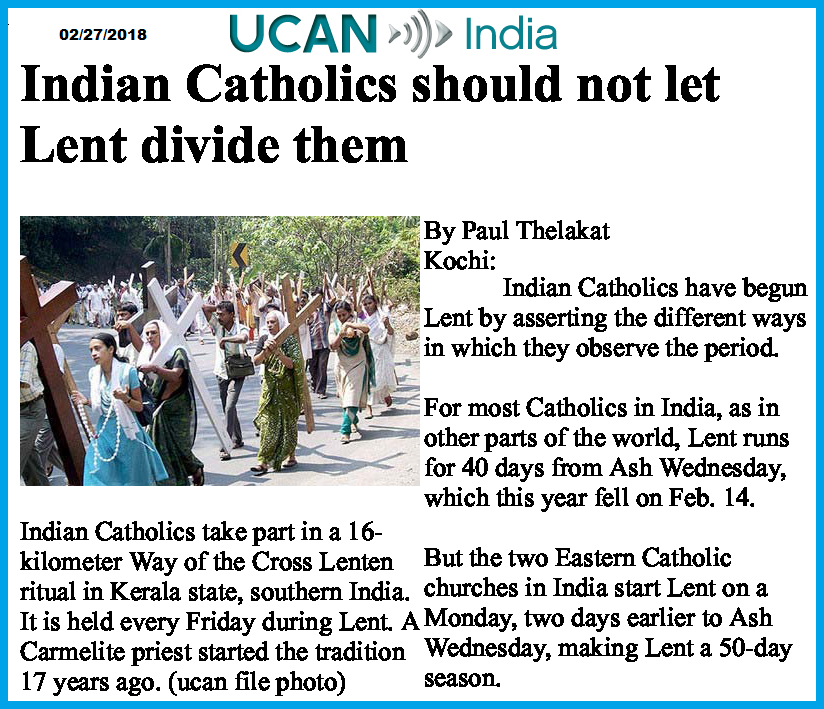 Indian Catholics have begun Lent by asserting the different ways in which they observe the period.

For most Catholics in India, as in other parts of the world, Lent runs for 40 days from Ash Wednesday, which this year fell on Feb. 14.

For many people this could be confusing. They may wonder how all Catholics can observe Easter on the same day when there is a difference of 10 days in Lent for the Eastern Catholics.

In essence, only the frills are different.

Practically speaking, Lent has become a seven-week period for the Eastern Catholic churches in India. It starts on Monday ahead of Ash Wednesday and ends on Easter Sunday, the 50th day.

But as every Sunday is considered a celebration of the resurrection in the Latin tradition, Lent is not observed on all six Sundays during this period. This, coupled with the later starting date, brings the period during which they observe Lent down to 40 days.

The two Eastern Catholic churches in India, the Syro-Malabar and Syro-Malankara, each have different identities and different rituals that reflect this.

The Syro-Malankara does not smear ash on its faithful to mark the start of the season in accordance to its unique West Syrian liturgical tradition.

Lent for the Syro-Malankara starts with a solemn service urging reconciliation and repentance, in which Catholics seek forgiveness from one another in embraces of peace and reconciliation.

Ash Wednesday does not resonate for them as they refrain from using ashes.

The vast majority of Indian Catholics live in blissful ignorance of these differences as 132 of 174 Indian dioceses follow the Latin tradition.

Most of the 31 Syro-Malabar and 11 Syro-Malankara dioceses are based in Kerala, a strip of land on the southwestern Indian coast.

Even in Kerala, despite an ongoing struggle to maintain a separate identity for their religious rituals, local Catholics do not see themselves as acting differently in terms of how they observe Lent.

Most Latin rite people in Kerala are not even aware that Sundays are free from Lent observations.

The general term for Lent in the local Malayalam language is “50-nombu,” an uninterrupted period of 50 days when all major Christian groups, including the three Catholic Churches, abstain from non-vegetarian food and all forms of alcohol. Many also choose to fast on Fridays in Lent.

In Kerala, where meat is considered a special treat normally eaten on Sundays, abstaining is not that hard. To make it more of a challenge, local people traditionally also avoid fish, milk and dairy products during Lent.

We can see that certain traditions are standard across all of the different Catholic Churches, or rites. They all observe abstinence and moreover, they all respect spiritual practices such as the Way of the Cross on Fridays, retreats, confessions and passion-related readings and prayers in churches much the same way.

Lent is not something that Christ or his apostles established. It began as a season of fasting that was connected with preparation for Easter baptisms.

Irenaeus of Lyons and Tertullian in North Africa teach us that these preparatory fasts would last for one or two days, or about 40 hours — certainly not 40 days.

Over the years, communities added weeks and days to the pre-Easter fast, stretching its duration to 40 days or more.

This gradual lengthening may have been done to prepare for the rising numbers of people seeking an Easter baptism.

Historical records show that the Council of Nicea in 325 AD established Lent as lasting for 40 days. At that time, the season began on the sixth Sunday before Easter and ended at dusk on Holy Thursday.

The 2nd century Syrian church order known as the Didache commends “the baptizer, the one to be baptized, and any others that are able” to fast to prepare for the sacrament.

At around the same time, Justin Martyr tells us that fasting was also expected of baptismal candidates in his community, and that they all prayed and fasted together.

Fasting for 40 days, for whatever purpose, seems to have been a common phenomenon in the pre-Nicene and Nicene period. The ubiquity of 40-day fasts should perhaps not surprise us given the prevalence and significance of this number in biblical literature.

Wandering-entrance becomes a primary typology for catechesis baptism in the early church, and milk and honey were sometimes administered along with the Eucharist to the newly baptized.

Forty days of fasting is equally common in Scripture. Moses fasts twice for 40 days and 40 nights on Mt. Sinai: once after receiving the Law (Ex 34:28; Dt 9:9) and again when he discovers the infidelity of the Israelites in fashioning the Golden Calf (Dt 9:18).

Elijah travels for 40 days and 40 nights without food after slaying the prophets of Baal and fleeing the wrath of Jezebel (1 Kgs 19:7-8).

Meanwhile, the Ninevites fast for 40 days to stave off the wrath of God (Jon 3:4).

The New Testament also speaks of how Jesus, after being baptized by John the Baptist, fasted for 40 days before facing Satan and his temptations.

Lent has become an amalgamation of early fasting customs and typologies.

In the context of the Indian Church, however, it may not be used as a preparation for a Paschal baptism.

Almost no new person is baptized during Easter Mass in Kerala, for instance. It is rare in other parts of India too.

Lenten practices have changed throughout history, both in form and content. And now is the time for the church in India, particularly in Kerala, to reformat the way it celebrates Lent.

What does Lent mean to a younger generation obsessed with taking selfies and feeding them to social media, a generation that owns smartphones and can communicate with the world?

Do they find meaning in abstaining from meat and milk?

Do they care about whether Lent lasts for 40 or 50 days or not at all?

Life, for me, is a constant temptation. At each moment, I am confronted by the possibility of becoming, which is indeed a burden and responsibility.

My life is a wrestle with God, or I against the other. I have to sacrifice myself for the other, or the other for me. I have no escape.

Does our Lent bear upon this struggle, making me more human, more just, more merciful and kind?

Will Catholics in India come together to start Lent on a common day as a witness to their unity?

The stress on our different identities should not drive us apart.

From a spiritual perspective, is it important to stick to 40 or 50 days, or to observe Ash Wednesday or Ash Monday?

Such rituals can serve as expressions of difference but the important thing to bear in mind is the bigger picture so as to remain united in love — love of one another and love of God.

Paul Thelakat, a journalist and priest from the Ernakulam-Angamaly Archdiocese, is a former spokesperson of the Syro-Malabar Church. He is based in Kochi, the commercial capital of Kerala.